The excerpt below is from a more detailed presentation linked here; SEWA Bens: Stories of Personal & Economic Transformation.

At the Self-Employed Women’s Association (SEWA), what is widely recognized as just a form for greeting a woman in Gujarat –”ben,” which literally translates to “sister”–in Gujarati actually the backbone of the entire organization–1.7 million bens strong across India. The collective sisterhood that is SEWA–benhood, if you will – is not only a social network, nor only a labor movement, nor only a set of social enterprises, but actually a comprehensive economic concept that stresses the importance of female welfare and empowerment for economic gains for households, and indeed, for the country.

For the women’s liberation movement in the United States in the 1960s and 1970s, “the personal is political” became a rallying cry. However, listening to the life transformations of bens who have been part of SEWA for decades (SEWA also started in the 1960s), it becomes obvious that one of the central ways in which being part of SEWA has taken hold of both their individual stories and the larger collective informal labor sector movement that they form is that “the personal is economic.” By being part of SEWA, the women build on each other’s support–leading to increased autonomy in their homes and communities, economic resources to invest in their houses and families, and education to increase productivity and income and take care of their health.

The bens of SEWA are laborers, activists, entrepreneurs, cooperative members, and often, the main income earners in their households. This fully multidimensional conceptualization of welfare which is so embodied in an Indian woman’s very being–and indeed, the clarity that SEWA as an organization has about the linkages between the personal and the economic, the intersectionalities between health, education, empowerment, and income–is obvious when one takes a look at the eleven questions that SEWA seeks to address in each of its works, be it a union activity, a cooperative organization, a water and sanitation program, or a savings group.
These linkages between the personal and the economic–the nexus that SEWA forms in linking the informal and the formal, the household and the economic market–also become obvious when listening to the personal narratives of women who have been a part of the “banyan tree” of SEWA for decades.
IMAGO Newsletter Sign up and we’ll send you the latest updates!
Share this with your Social Community 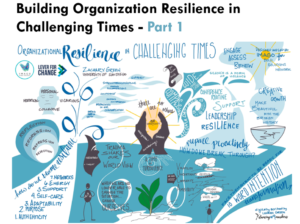 Part 1 of lessons to guide organizations in understanding and building resilience ...